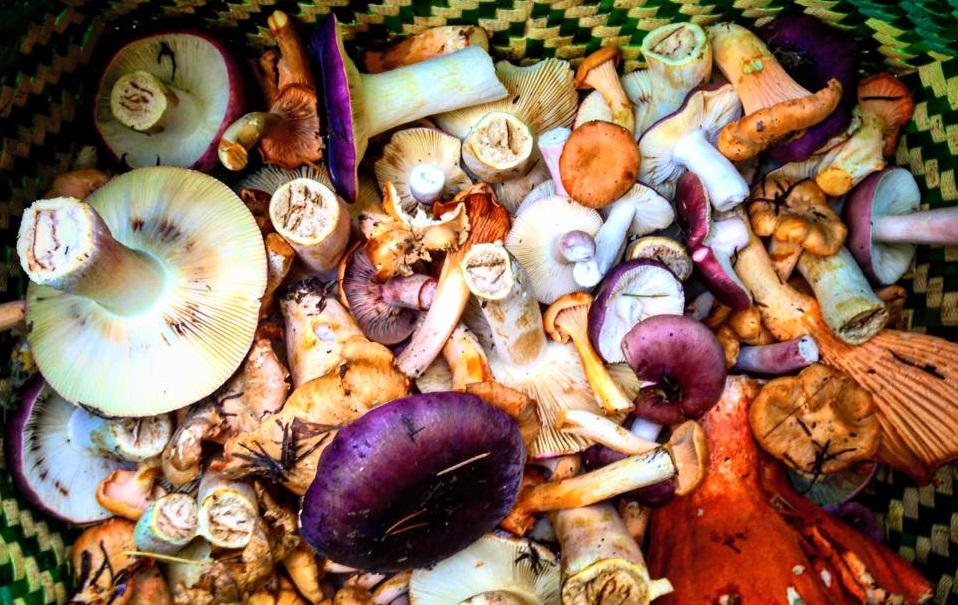 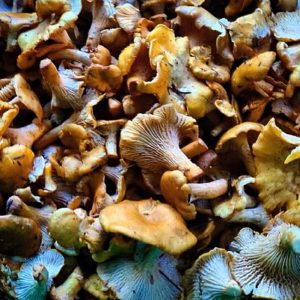 A good haul of Chanterelles from the coast.

Chef Varin Keokitvon is passionate about mushrooms, and about foraging. Spring may find him hunting the burns of eastern Washington in search of morels, summer casting lines for salmon while scanning the shoreline for hints of porcini, but it’s fall that delivers the true fungal bonanza: more types of mushrooms than might be counted on a hand or two. First often come those toothy hedgehogs, with their spiny underbelly. Then come those meaty, fruity Chanterelles which pop up bright white or yellow-orange along the forest floor.

This year’s Chanterelles began arriving in late August, despite the fact that it had been dry, and were mostly pulled off the coast. Chanterelles shine in egg dishes, and also alongside fish, which is how Chef chose to exhibit them first: a whole grilled trout was served with a succotash of corn and nduja—that spreadable, spicy salumi from Italy—and house-pickled chanterelles. 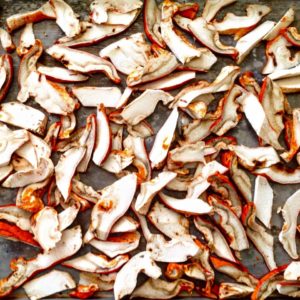 Lobster mushrooms ready to be dried.

That was just the beginning of this year’s culinary mushroom adventures. Chef Varin experimented with steak and lobster mushrooms—a toothsome and crayola bright parasitic fungus that takes over other mushrooms. For a volunteer event he made two versions of a soup: Omnivores were served a version with braised smoked oxtail and foie gras powder; vegans (can we say “lucky vegans”?) a mushroom soup that began with a mushroom marmalade on the bottom and was topped with a porcini powder.

Chef himself forages as often as he can, although for our downtown Seattle restaurant he sources exclusively from purveyors such as Foraged and Found. Anything he collects on his own goes to his home cooking, or into test kitchen dishes. 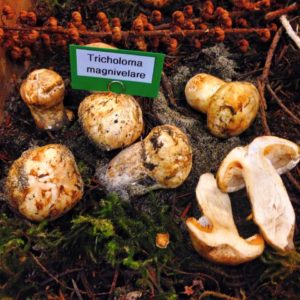 And now, with matsutake season upon us, Chef is on knife’s edge. Matsutake, the delicate mushroom that tastes somehow like rain water running off a pine tree, are notoriously fickle. Many seasons—like last—come and go with nary a matsutake to be found. More rarely there will be a year so lush with the pine mushroom that market prices plummet from $70-something per pound to the low teens.

Oh, but to be so lucky. That will be a boon for the chef and diners alike. While he waits, chef is dreaming up matsutake dishes. He might grill them simply with lemon. Perhaps there will be a matsutake and rice pilaf, or a simple execution with pinenuts.

For now, though, chef sharpens his mushroom knife and waits. He knows that somewhere out there are boletus and pig’s ears, Chanterelles and matsutake, just waiting to be gathered.