Hold the Cheese: Quince Gets It’s Due

It may be best known as membrillo—the thick, fruity jelly regularly found on cheese boards—but quince shouldn’t be relegated just to a paste. With quince coming into season and appearing fresh at farmers’ markets, Chef Varin Keokitvon has been turning the traditional on its head.

He hasn’t gone so far as to start serving the fruit raw, despite the fact that his mother eats it grated fresh in papaya salad. “Quince is astringent, sour, and bitter. But, those are three qualities that Laos like in food,” says Chef Varin.

Raw quince is not for the faint of heart. “It’s so bitter and tart that it is nearly inedible,” says Chef. “But poached, it becomes almost like a canned peach, only more firm. It turns pink and has a honey-like flavor.”

Which is why Chef Varin has been poaching up a fruity frenzy. After weeks on Heartwood’s Let the Chef Decide menu, a brand new quince dessert is now appearing on the regular menu. Composed of poached quince, toffee sauce, cultured cream, spice cake, and tonka bean ice cream, the dessert will be served for as long as the autumn quince season continues. 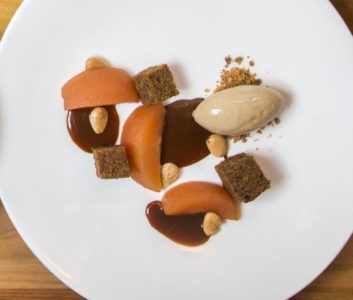