Beer week is here, and though we love tasting our way across Seattle one funky IPA after another, our palates could use a break. Which is why we asked Amanda Reed—inventor of the sublime Wanderlust and that tantalizing Original Provision beer cocktail pairing—to save us. What’s the secret to making a great beer cocktail?

“There are two ways to figuring out what will work as a beer cocktail,” says Reed. “If you really want to focus on beer, then you don’t want to add much to it.” Which is to say, don’t hesitate to combine six parts of a high-personality-beer to one part fortified spirit. And, when making a beer cocktail that’s topped with sparkling wine, use a light hand. The sparkling should add a bit of fizz or floral note to the drink, not serve as the main ingredient.

As for choosing what spirits and beers play well together, Reed says find things that are equally subtle, or equally pronounced. Take stout, for example. She recently made an Amaro cocktail with oatmeal stout. And, there was the time she paired rich, black strap rum with stout, too.

“They have the same in body, richness, and weight,” says Reed. “A lager gets tequila, maybe mezcal. Finding a similar structure is key.”

How Heartwood Does Beer Cocktails 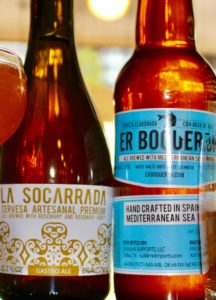 Reed’s Wanderlust, which is currently on the menu at Heartwood Provisions, is a great example of equal balance. Made with mezcal, plum shrub, genepy and lime, the cocktail is topped with a Spanish rosemary ale. It is, simultaneously refreshing and approachable.

Then, there’s the tantalizing, spritely concoction paired with the Original Provision. The drink has been on the Heartwood menu since the start, and was made expressly for the Waygu jerky. The drink’s base is a Spanish Mediterranean sea salt ale that Reed stumbled at nearby DeLaurenti, in Pike Place Market. She tops the saltwater brewed ale with carpano bianco vermouth to round the cocktail out and add complexity.