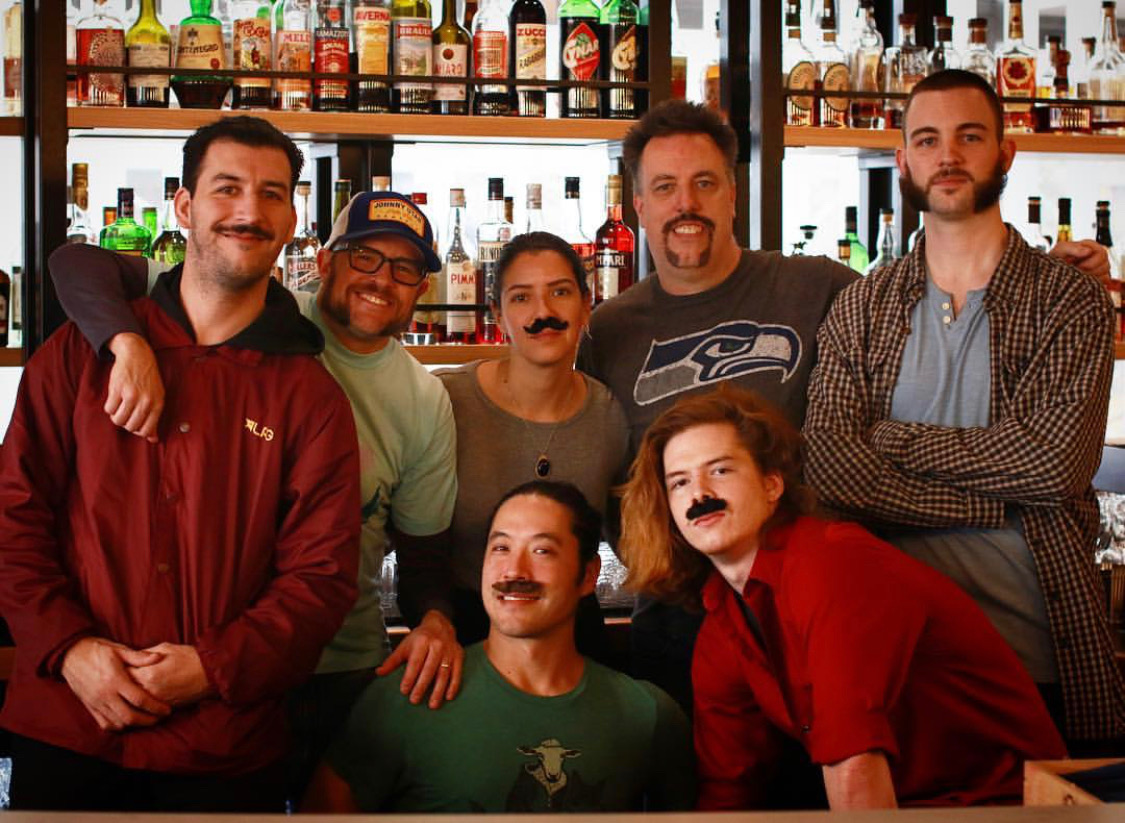 Catching Up With The 2019 Bar Team

In recent years, Seattle’s bar scene has evolved and gained the reputation of being one of the most dynamic in the country. According to Beverage Director Amanda Reed, “The key to a great bar is bartenders who create good vibes with high-level hospitality. In a craft cocktail bar, creative drinks made with fresh ingredients are important and having talented bartenders to execute the vision is key, but if you don’t have attentive and friendly service, I wouldn’t consider you one of the greats”. It’s been three years since Heartwood opened their doors and Reed considers her current team the best rendition yet. “They are some of the best in town! I feel so fortunate to have so much talent, personality, and experience behind our bar”. Here’s a sneak peek at Heartwood’s perfectly crafted team.

Kyton Blair has been a part of the team since leaving Damn the Weather over two years ago. Kyton is a renaissance man here at Heartwood. He is not only a valued member of the bar team, but also works on floor as a server and sommelier. He is passionate about all the things beverage and loves to engage. He can wax poetically about everything from mezcal, to sherry to wine. He is a true drink geek.

What was the first cocktail you ever tried to create, and how did it turn out?

The first was called a Pink Passion. I made it with gin, Aperol, pear eau de vie, grapefruit bitters, with a float of Moscato sparkling wine. It turned out delicious, but boozy.

What’s your favorite drink that you created that made it on the Heartwood menu?

A Spaniard and a Frenchman, because who doesn’t love a baked Parmesan cheese crisp garnish.

When creating a new cocktail, what ingredient or element serves as inspiration?

For me, the name is always last. I never name a drink until it’s ready. You never know what the drink will taste like or what it will remind you of. If I am creating a drink for the menu, then it begins with a spirit profile. If I’m making a specialized drink for a guest, then I ask them what flavors or spirits they enjoy. After the spirit is chosen, then it’s a matter of playing with flavors. I’d say 95 percent—if not all—cocktails fall into about seven different templates. Once you understand those templates, and you know how to make a balanced drink, then you can insert or substitute ingredients. At that point, you’re really just playing with flavors.

During the spring, playing lacrosse; I also enjoy playing tennis, ping pong, or going on hikes.

Once upon a time, Cadden worked with Amanda Reed at a secret bar space somewhere across town. When the opportunity came along for the two to work together again, Michael was game. He has been at Heartwood for over two years and has become a leader amongst the team. Michael manages Heartwood’s multifaceted syrup program and contributes heavily to the creativity of Heartwood’s drink. He’s also invested in the cocktail competition circuit. Last year, he was one of five Seattle bartenders chosen to compete in the Goslings Rum cocktail competition in Bermuda, where he placed 4th in the nation.

What’s your favorite drink to drink or to make?

There’s nothing I don’t like. I think cocktails are dictated by environment, mood, and how you are feeling. That’s how I like to drink. I like to get very seasonal with my drink creations. Winter calls for Manhattans, Old Fashioneds, or sometimes whiskey neat. Spring and summer inspire me to mix spirits with fresh produce. (True story. That’s why we tapped Cadden for a story on preserved cocktails).

I would say, it’s the drinks that don’t make the menu that are my favorite to make. The customized cocktails I make for guests are often outside the box, maybe a little too out there for our menu. I get the most pleasure from making drinks on the fly for what the guest is feeling in that moment.

What’s your take on the evolution of bartending?

I like it. My first bartending jobs were not in cocktail-focused locations. I worked in restaurants, beer gardens, and pubs; but that wasn’t necessarily what I wanted to do for a career. Cocktail bartending was in its youth when I started, and that was exciting. I love the evolution, but I’m also a firm believer that not every bar has to be a craft bar. Still, with the cocktail revolution, everyone is trying to get a specialty cocktail on the menu, and that’s upping the game across the board in Seattle.

What is your favorite part of your job?

My guests and providing great service. Especially with Heartwood. Here, we have an eclectic cliental—people who live above us, people who work in the neighborhood, and tourists who are happy and excited to be on vacation in Seattle. I love that. Nothing makes me happier than having a guest say, “This is one of the best experiences I’ve had in a restaurant.”

Andrew Larson is another bartender who followed Reed to Heartwood. In his case, from Tavern Law and RN74. After Larson cut his teeth in Seattle, he moved down to San Diego and established himself in their budding craft cocktail scene. After moving back, Amanda quickly snatched him up to be a part of Heartwood’s already dynamic team. Larson’s raw talent and creativity when it comes to cocktails (and cocktail photography) have made him a force to be reckoned with. Andrew’s skills have landed him placements in a number of cocktail competitions, winning him trips around the world.

Was there an “aha moment” when barbacking for Amanda that made you think you wanted to be a bartender?

I consider Amanda my bar mom. She’s legitimately the most knowledgeable person behind the bar. Watching her interact with guests and change someone’s crappy day into an awesome one made me think, “Alright, I definitely want to do this.” This is an awesome way to make money, make people happy, and actually get to interact with people every day.

What was the first cocktail you ever tried to create, and how did it turn out?

One of the first I created was a play on one of my favorite cocktails, a Blood and Sand. I worked with Amanda on this. It was made with a peated scotch, Licor 43, sweet vermouth and blood orange juice. It ended up tasting super good and made it on the menu

Shooting photos at Madison Beach or out on a hike.

That would be the Water of Life. It was a huge hit last summer. It was made with a split base of mezcal and gin with a cold-smoked watermelon syrup, peach liqueur, fresh lemon juice, basil and topped with IPA. I served it over rocks and rimmed the glass with sal de gusano—a five chili blend with dehydrated worms and salt.

Justin Nisly is a vet in the Seattle bartending community. Before working at Heartwood, he worked at such establishments as Radiator whiskey and the Metropolitan Grill. Justin brings classic hospitality to the bar. He genuinely loves people and has a passion for what he does. This father of two is also one of the fastest movers and shakers in town. Nisly has a long list of regulars who come to see him for the elevated experience he provides.

The Purple Haze made the Heartwood menu last winter. It’s an egg-white, bourbon cocktail with an allspice port reduction, lemon, pear liqueur, and black beer. These days, my Gathering Storm has become a new favorite. This drink has a bourbon base (his favorite), vanilla bean-infused banana liqueur, Cynar, and fresh lemon juice. It’s an easy drinking, winter sipper.

What is your favorite part of your job?

In general, talking to people. I enjoy connecting, and I love how Heartwood provides an opportunity to play and have fun with your guests, and to create authentic experiences.

What’s your take on the evolution of bartending?

With the popularity of cocktail culture and access to information through the Internet, the guests have become much more knowledgeable than in the past. They know cocktails and spirits and how to order. In the past, they would ask for a Lemon Drop or a fruity drink, but now they’re much more interested in classic cocktails and more and more into craft drinks. The consumer is also much more open-minded and adaptable these days. And, because they are more educated and savvier, if you earn their trust, they are much likelier to let you make them something original. That gives me more opportunity to engage and to create a unique experience.

Although Toshi Stang has worked at Heartwood for over a year, he is the newbie on the team. Toshi is another Seattle bartending vet with a name and reputation that precedes him. Born and raised in Japan, Toshi moved to Seattle when he was 19 and has worked in the hospitality industry ever since. He has done everything from rolling sushi and working in kitchens, to management to having his own catering business and most recently as a long-time rum-tender at Seattle’s own tiki mecca, Rumba. Here, he built a cult following for his weekly tiki night where he was not only bartender but procured the cocktail menu selection and used his artistic design talent to create the physical menus. Toshi’s passion and attention to detail made him a perfect fit among Heartwood’s cocktail enthusiastic team.

How did you get to Heartwood Provisions?

It’s hard to find a restaurant that’s more than one dimensional; that has a strength in more than one area. It was easy, for example, to find places with great cocktails, but their wine program wouldn’t be up to snuff. I am also attracted to hospitality. Heartwood has the old-school hospitality of our parent restaurant, the Met Grill, but with a younger, hipper feel. Heartwood has it all, a great cocktail program, amazing wine and amazing food.

When creating a new cocktail, what ingredient or element serves as inspiration?

For me, the name of the drink comes first; it’s the inspiration. I like to spend time outside and at least once or twice a week I’m deep in the woods. Normally, I’m with someone else—often other bartenders even—and sometimes we come up with a really good cocktail name. For example, a while back a friend and I were hiking and found goat tracks. They were very clearly goat tracks. Next to them was a cigarette butt. At first, we were really angry, but then we started joking around—like, “maybe the goat was smoking”—and that led to the idea for a cocktail. The Smoking Goat. So, I always come up with the name first, then I start thinking about it in depth. Then I try to create a cocktail that matches the image of the name.

Outside. I go offline quite a bit—hiking, fishing, camping, etc.