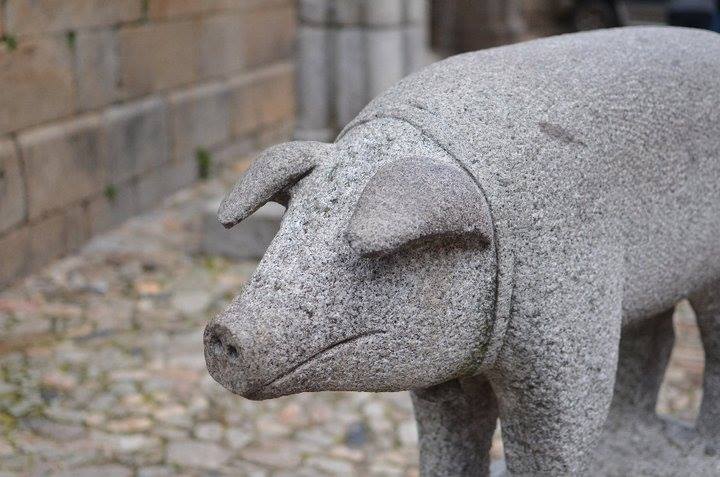 In 2011 Chef Varin was very fortunate to be selected for an ICEX Spain culinary scholarship, which allowed him to travel to Spain for nearly a year, learn about the cuisine, and work in two great restaurants—El Celler de Can Roca and Espai Sucre. It also allowed him to discover a great passion: jamon Iberico de bellota.

Before going I knew little about Spain. For many there are standard notions: That all Spanish people dance flamenco, nap, eat paella and drink sangria. My trip put to rest many of these stereotypes.

In all fairness we did see some beautiful flamenco (which I learned is a very emotional art form that marries passionate dance and music). We napped sometimes, although after working from 8 A.M. until 5 P.M., and then again from 8 P.M. until 1 A.M. I discovered just how hardworking and resilient the Spaniards are. There were many variations of paella, some with noodles, all delicious. The only sangria I drank was during San Fermines, the running of the bulls festival in Pamplona.

Our journey through Spain was one of the most enriching times of my life, both culturally and for culinary development. One memory that sticks with me is the first time I had jamon Iberico de bellota (dry cured ham from acorn fed pigs) in the town of Salamanca. It was our first day there and a friend and I saw jamon hanging from the door of a charcuterie shop and went inside. We ordered a bocadillo (sandwich) that was so delicious we bought an additional plate of jamon iberico de bellota and ate it instantly. 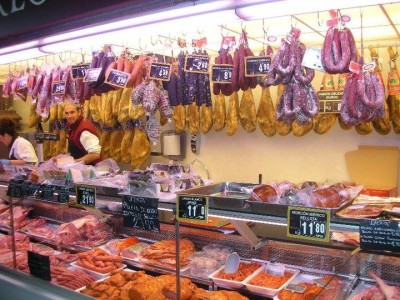 Embutidos and jamones in Barcelona

The history of the black Iberian pig stretches far back in history. A cousin to the Mediterranean wild boar, this pig—pata negra (black hoof) as it is often called—has black skin, is nearly hairless and is huge, weighing up to 400 pounds. The pigs are normally free range and allowed to roam forests and pastures with cork and oak trees for up to two years. The most prized pigs go through a process called montanara wherein they gorge on bellota (acorns) from late November through January, during which time they nearly double in weight. Only then are they ready to be sacrificed and turned into delicious jamon Iberico de bellota.

Making jamon is an ancient technique that requires salt, the right conditions, and time. The hams are brined/cured in sea salt for about two weeks then are hung to dry, allowing natural mold and bacteria to form on the surface. This may take up to three years, during which time they must lose at least 30 percent of their starting weight.

Before a jamon Iiberico de bellota even gets to the market it must be smell-tested by an inspector, who also pierces the jamon with a sharpened beef or horse bone. Only then will the jamon Iberico de bellota get the stamp of approval. 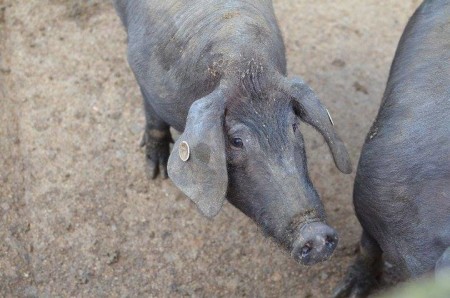 There are many different types of jamon, here are some typical ones you may find:

Nothing beats the sweet, nutty, complex taste of Iberico bellota. It is the Ferrari of jamons and comes with a Ferrari price tag as well, sometimes costing as much as $2000 for a leg. Since 2008 it has been available in the United States and available at many online retailers. 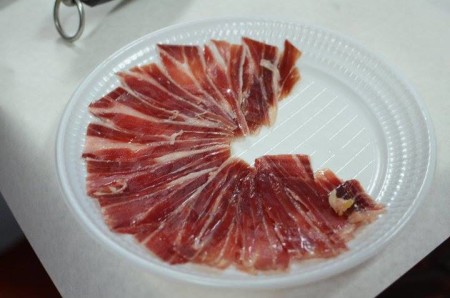 Following is a recipe for what you can do after you’ve enjoyed your jamon and have scraps leftover.

Combine butter, onion, garlic, and spices in a saucepan and sauté onions until translucent and soft. Do not caramelize the onions. Deglaze the pan with sherry. Add flour to the onions and stir until combined. Add milk in small increments while stirring until all of milk is combined and smooth. Cook over medium heat while stirring for 5 minutes. Add salt, pimenton, cheese and jamon and stir until combined. Cool mixture completely in fridge.

Combine Scoop mixture out to 1 oz pieces and roll into small cylinders.  Put mixture through a standard breading procedure to form croquetas: dip in flour, egg, breadcrumbs. Chill croquetas before frying at 350-375 F. Croquetas can even be frozen for next Sunday’s football game!

Note: To learn more about Spanish charcuterie or jamon, check out my buddy’s book “Charcuteria” by Jeffrey Weiss. Jeff was an ICEX scholarship participant in 2010, and is a savage butcher and fellow chef. 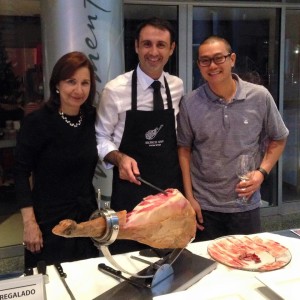