The How’s and Why’s of Black Garlic

Black garlic is having a moment and getting love from everyone from chefs to Bon Appétit to Lucky Peach. Also, it’s delicious.

While we’ve been using black garlic like it’s salt here at Heartwood Provisions for some time—including in foie gras, on parsnips, and in an absolutely unctuous aïoli—for many what makes this lily black is a mystery.

Black garlic that starts off white but blackens through a very slow, heat-induced aging process. It is not fermented, and it hasn’t gone bad. Rather, it changes color and flavor through an and an enzymatic breakdown and a chemical reaction called the Maillard reaction. While white garlic is full of funk and spice, black garlic is it’s sweeter, caramelized other half. It’s a lot of umami in a papery little shell, without regular garlic’s heat, pungency and funk.

To Buy or DYI?

These days it’s relatively easy to lay hands on black garlic. Even Trader Joe’s carries it. But for those who want to DIY black garlic, Chef Varin Keokitvon has the tricks. The man, after all, is not afraid to make his own caramel or turn the skein of the salmon he catches into smoked roe. In this case, he makes black garlic with the help of a rice cooker rescued from his garage. A rice cooker works better than, say, a conventional oven, because it offers continually moist, low-temperature heat. 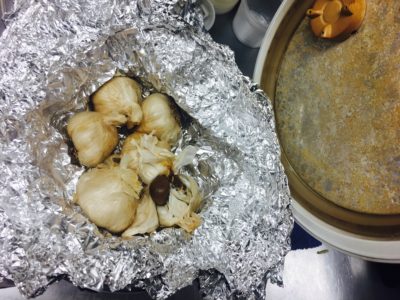 DIY Black Garlic: Place garlic heads in foil, then into the rice cooker.

To make black garlic, Chef Varin wraps heads of garlic in foil, places them in the rice cooker, presses “warm”, and walks away. About once a week he rotates the garlic from bottom to top. Then some 30 to 45 days after it all began, he has black garlic in spades.

“It’s crazy, the rice cooker has been going nearly non-stop since before we opened the restaurant,” says Chef Varin. Whether the electric bill is higher or lower than what he’d pay a supplier for restaurant portions of black garlic Chef can’t say. What he can say is that this may not be a do-it-at-home project for everyone. His black garlic chef tip? Make black garlic in a well-ventilated space. On Chef’s first attempt at-home (or in-garage) attempt, the garlic odor so infused everything that he had to move the rice cooker outside for the duration. Even then a garlicky essence permeated his fishing line filament for some time. 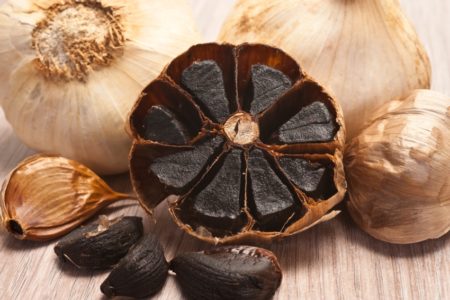 It bears mentioning that once you have a supply of it, cooking with black garlic is practically child’s play. You simply use it the way you might regular or roasted garlic, and expect super earthy, nearly sweet results.

“Use it to flavor things,” says Chef Varin. “Puree it in your hummus, make a chili oil to flavor your ramen.” Or, recommends Chef, just mash it with a bit of butter and spread it on toast.