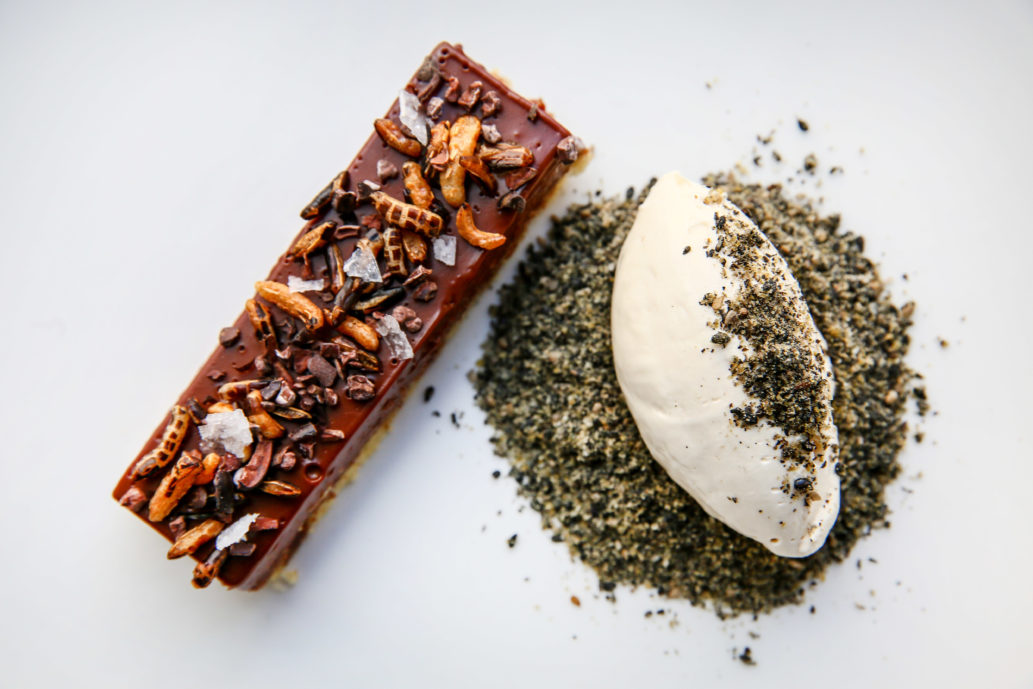 Art of Dessert, Surprise of the Meyer Lemon Tart

First comes the smoked caramel panna cotta with its butter apples and hazelnut crumbs. Then there’s the posset, a pastel passionfruit filling a glass modern glass, followed by a ruby dark briquette of chocolate, artfully positioned alongside a scoop of toasted ice cream.
If the desserts streaming from the Heartwood Provisions kitchen seem a bit like modern sculpture or a piece that belongs at the Seattle Art Museum just up the street, don’t tell Chef Varin Keokitvon. The idea of artful food makes him squirm a little. He likes to think of his work more as artisan than artist.
“For me, we’re just cooking food for you and hoping you leave happy and with full bellies,” says Chef Varin.
Still, it can be hard to escape the impression of his desserts as masterpieces. When a pale panna cotta, topped with rose meringue and lychee sorbet, arrives quivering on a plate strewn with petals one might be tempted to confuse it for the centerpiece.
In actuality, rather than focusing on plating art, Chef Varin likes to play with revelations.
“One of the things we do with a lot of our dishes here is to almost hide things. It’s kind of like a surprise if you will,” he says. A surprise in the sweets? Crackerjacks never had it so good.
These surprises can be found in Chef Varin’s Meyer lemon tart. For starters, it doesn’t look very pie-like. Rather, the tart arrives consumed in a lemon mousse and playfully topped with an orb of yellow ice cream. Hidden beneath it all is the sweetness of the tart, and a bright, sweetly acidic kumquat marmalade. 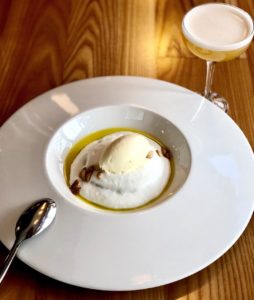 To make the masterpiece, Chef Varin first lays down a kumquat marmalade, which brings a cooked citrus touch to the dish. Atop the marmalade he places a disc of tart dough—a pine nut pâté sucre to be specific—which is rolled out like a cookie. Then comes a piping of homemade lemon curd. Next, Chef Varin fills a nitrous oxide charger with lemon mousse and dispenses the silky cream all over the tart.
Gone is the expected—the shallow, fruit-filled pasty. Here instead is something resembling a glorious bowl of yogurt, which is sprinkled with pine nuts to hint at the slight nuttiness of the underlying dough. The tart is served a la mode with that pastel globe of Meyer lemon ice cream and then drizzled in olive oil.
Dip in and the once invisible tart emerges in the spoon. There’s the brightness of the kumquat, the earthiness of the pine nut, the subtly sweet lemon curd, and the teasing riff on meringue. Chef Varin likes to think of the dessert as “a funky way to hide a lemon tart.” We like to call it the art of dessert, Keokitvon style.

Art of the DIY Dessert Advice

As for pulling off a masterpiece like this at home, Chef Varin has just a little advice: Chefs hoping to master sweets are best served by beginning with basic chemistry.
“I think people overthink dessert,” he says. “Knowing why things happen is most important.” Think the chemistry of cookie dough, for example. Over cream the butter and sugar, and you get a tuile; fail to whip it enough and the cookie won’t spread.

As for the other dessert surprises on the Heartwood menu, those continue to evolve and change with the seasons. The Meyer lemon tart—which is paired with a rum, tropical fruit, and wine-based aperitif—will stay on the menu through mid-Spring. Coming soon in its place will be a rhubarb concoction that melds sweet and sour, artisan and artistry as only Chef Varin can.